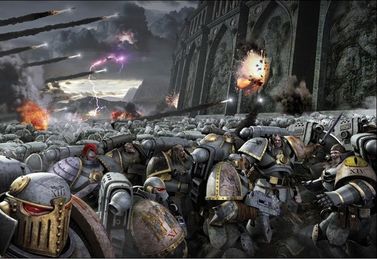 Imperium Incarnate is a fandom wikia designed as a alternative historical account of the Warhammer 40,000 universe produced by Games Workshop. Focusing on a re-imagining account of the 31st millennium during the Great Crusade and the Imperium's civil war, known in the original story as the "Horus Heresy".The complete content of the Legions Incarnate Wiki actually consists of 24 Articles.

In the Imperium Incarnate alternate universe setting, the story generally follows along the same lines as it does in the original canon setting. The burgeoning empire of humanity, known as the Imperium of Man, has just been founded by Emperor of Mankind on Terra, following the end of the Age of Strife. Creating genetically superior transhuman soldiers - the first proto-Astartes - the Thunder Warriors, the Emperor first begins the Unification Wars and reunites the disparate nations and tribes of Terra. He then begins his great endeavour - the Great Crusade - to reunite the worlds of Mankind into a great, star-spanning empire - the Imperium of Man. He begins this great quest by first conquering the Sol System.

Shortly after, the Emperor forges a powerful alliance with the Mechanicum of Mars, securing their vast forges that churn out countless arms, equipment and warships. This lays the foundations of the burgeoning Imperium and enables numerous Expeditionary Fleets to be launched throughout the galaxy in search of lost worlds of humanity.

In the Incarnate setting, alterations have been made for our own interests, with the most fundamental one being that there are now 20 different Primarchs, Space Marine Legions and legion homeworlds of our own devising.

This web site is completely unofficial and in no way endorsed by Games Workshop Limited or Fantasy Flight Games. 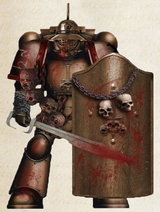 Honour Bound
The Honor Bound, also known as the Bloodied Ones was one of the original 20 Space Marine Legions created by the Emperor of Mankind to secure the glorious destiny of Mankind, sired by their Primarch Antrioch Skullwrath, The War Champion. Born and Bred for war, the Honor Bound know no equivalent in the art of melee combat. Known highly across the Imperium as "The Bloodied Ones" or "The Hounds of the Emperor", they have turned entire Systems into service of the Emperor just by arriving and preparing for battle. Known among...
Read more or see the archive.